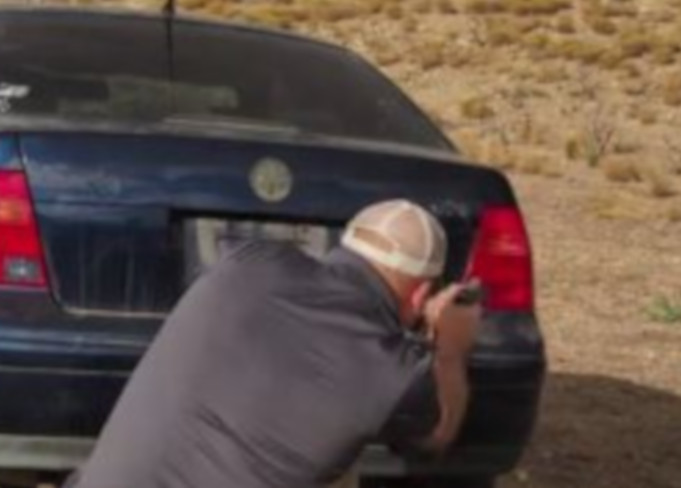 Wenatchee, Washington – A man is facing two counts of assault after being held at gun point last Thursday afternoon.

According to Captain Edgar Reinfeld of the Wenatchee Police Department, at 12:23 p.m. officers responded to a call of a man being held at gun point outside a 76 gas station located on Ferry and Mission.

Within 45 seconds officers were on scene and taking control of the situation. They were informed by the store clerk that a man who appeared to be intoxicated, entered the gas station and had attempted to talk her into letting him have alcohol without paying for it.

When she refused, he became aggressive and threw a bottle at the clerk, hitting her in the head. He then jumped behind the counter and threw her to the ground where he continued to assault her before running out the door.

The clerk chased after the suspect, calling out for help. Another customer was pulling into the gas station heard the clerks call for help, exited his vehicle, and attempted to stop the fleeing suspect.

The suspect took advantage of the unoccupied front seat and tried to jump into the car with the driver’s children in the back seat.

The father then drew a gun and held the suspect at gunpoint until officers arrived shortly thereafter.

The clerk was reported to have no obvious signs of significant injuries and received treatment at the scene before being released. Meanwhile the suspect was taken to Central Washington Hospital for injuries he claimed he received while being held at gunpoint by the father,

Captain Reinfield praised the fathers willingness to help, but cautioned actions like this can be dangerous for civilians.

“We can’t do our work without the help of citizens like him,” the Captain said. “What kind of help they choose to provide is where it can get weird. Interceding in things like these can be exceedingly dangerous and scores of civilians die in incidents such as this one every year across the nation.”

“In this case it all turned out ok,” he continued. “It’s a personal choice how deeply any civilian wants to involve themselves when something like this happens, but we always need information from the public, so folks don’t need to go to measures like this to be of assistance. Sometimes when citizens become too involved in can turn out terribly tragic, however, so we’d like to caution the public to be prepared to make a smart decision in the event they find themselves involved in a case like this.”

Reinfield went on to say the Wenatchee Police Department would rather citizens observe and report instead of getting actively, or physically involved in a dangerous situation.

“Realistically, the thing we need most is we need involved citizens. Involved citizens means 99.99% of the time, be a good witness and call us.  The choice to intercede into something like this is a deeply personal decision, and the outcomes can get really complicated. If he had shot this person, that’s a much more complicated scenario than what we have in front of us now.”

The Captain indicated that while there may have been a need for the father to draw his gun, this is not a situation which will be over quickly.

“But at the same time, he’s probably got a pretty good argument that he was in reasonable fear for his safety, the safety of his children and his vehicle.” explained Reinfeld, “I don’t think charges are likely but this is not something that you just walk away from.”

Captain Reinfield went on to say that the suspect has yet to be charged for altercation, but faces two counts of assault and attempted robbery.

Violent crime happens in and around vehicles more often then you might think. Brush up on you Vehicle Firearm Tactics here.

As Captain Reinfield  stated, use of a weapon to defend yourself is, “… not something that you just walk away from.”

Even if you are absolutely correct in your use of a CCW pistol to defend yourself and your family, you could face financial difficulties while you navigate the legal system, waiting to be cleared of wrong doing.

Self defense insurance helps alleviate those financial burdens and assist in facilitating a qualified and well rounded legal defense team. And USCCA offers some of the best.