Late Friday, the Washington State Legislature dealt another blow to gun owners in the Pacific Northwest. With a vote of 55-42, the Washington Senate passed SB5078. Everyone knows the law does nothing to enhance public safety. It only gives desperate Democrat lawmakers a pound of flesh that they can throw to their gun-hating base. 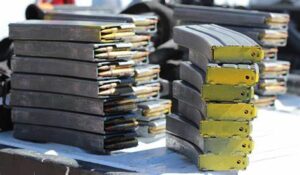 SB5078 does nothing for public safety —

The magazine ban applies to both center-fire and rim-fired magazines that hold 10 rounds or more. SB507 bans the manufacture, possession, distribution, importation, selling, offering for sale, purchasing, or transfer of these so-called high capacity magazines.

One of the bill’s sponsors called, Senator Marko Liias said this after the passing vote:

For too long, we have accepted gun violence as an inevitable part of life. My own community was impacted by gun violence in 2016 when three young lives were lost due to a mass shooting. Today, the Legislature took long-overdue action to protect families across Washington from that harm by restricting the sale of high-capacity magazines. This is a commonsense policy that will save lives, and I am grateful for all of the years of advocacy that led to its passage.

There is still time to purchase your 10 round magazines —

Washingtonians can still possess magazines with over 10 rounds; they just can’t purchase, sell or import them. Here is the final bill.

Ammoland reported that orders placed on Palmetto State Armory for “high capacity” magazines from Washington state would ship out immediately and prioritize other orders. So you folks in Washington State have until July 1st to legally purchase magazines over 10 rounds. 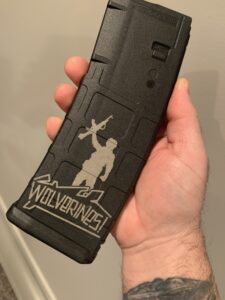 When fighting the Russians, 30-rounders come in handy.

I don’t live in Washington, but if you do, I suggest looking into organizations like Washington Civil Rights Association. The Washington Legislature is hostile toward freedom and gun rights, and they won’t stop attacking your rights. Hold your elected officials accountable and vote out the ones who trample on liberty.

Here is a post from the Washinton Civil Rights Association’s Facebook page that includes an explanatory graphic on SB 5078. 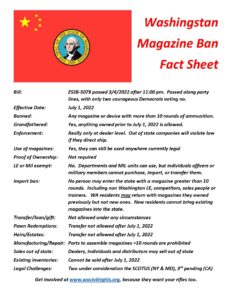 The best gun-law resource for gun-owners who travel —

Consider checking out the Legal Boundaries by State book. This resource includes way more than a reciprocity map. The book provides all the laws you need to know when you travel to another state. Things like if you have a duty to notify law enforcement, if there are magazine capacity limitations and if ignoring those “no gun” signs could get you arrested. The book is regularly updated, with new editions released periodically. The e-version is updated any time a law goes into effect, and you have lifetime access to the e-version. You can learn more about the book, by clicking here.