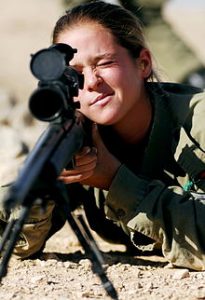 Seattle, Washington — Early Thursday morning, South Park officers were dispatched to a call from a woman who reported shooting an armed man who  attempted to break into her home.

As Officers arrived at the residence located on the 600 block of Riverside Dr., they witnessed a vehicle flee the scene with a passenger inside.

As they moved onto the scene, officers had to talk the woman down from the roof where she looked out into the backyard with her rifle before they were able to allow Seattle Fire Department Medics on scene to treat the suspect.

The 41-year-old man she’d shot lay with a single gun shot wound in his shoulder. Next to him lay his handgun.

Investigators say the exterior of the home was riddled with bullet holes they believed where fired by the suspect during the gun battle with the armed homeowner.

Law enforcement was also able to track down and arrest the two men who fled the scene as officers arrived. Both men, the 38-year-old driver and the 24-year-old passenger, were booked into King County Jail until the investigation is complete.

The homeowner was interviewed and released by detectives with no charges pending against her at this time.

Fortunately, this woman was armed, or the three men would have stormed into her home unhindered. Did you know that an AR-15 is a far better home defense weapon then a pistol? Click here for an article by Matthew Maruster on Why You Should Consider the AR-15 For Your Home Defense Gun.

Knowing how to fight in your own home can be a significant asset when it comes to surprise attacks launched by home invaders. Click here for Complete Home Defense – Tactics For Defending Your Castle for the latest tactics and techniques in home defense.